The factory of the future is already up and running in Saxony. - The "E3 Research Factory Resource-efficient Production" in Chemnitz

If manufacturing experts want to know how they can organize the production of tomorrow, then they will find pioneering answers in Chemnitz. The factory of the future is already in operation here. Scientists of the Fraunhofer Institute for Machine Tools and Forming Technology IWU are rethinking industrial production and testing their innovative E³ concept in the E³ Research Factory "Resource-efficient Production." The three Es stand for the development of new machines, technologies, and processes which help save energy and other resources, create an emission-neutral factory, and rethink the integration of humans into tomorrow’s production. All production levels, processes, and process chains are designed in such a way that the researchers and their industrial partners are able to investigate the entire factory and its environment in a comprehensive, holistic approach. The tests include new technologies and concepts in the competence fields Car Body Construction, Powertrain as well as Energy and Data Management 2.0.

Why is the first E³ Factory located here in Saxony?

Saxony and, above all, Chemnitz with the Fraunhofer IWU and Chemnitz University of Technology have become a prime location for production engineering research which is acknowledged and widely acclaimed well beyond Germany’s borders. We’re successful because we take an entirely new approach on the urgent tasks facing our time and developing entirely new and innovative research concepts as a result of it. In light of the increasingly scarce resources and the demographic changes, we need to rethink things so that Germany continues to be competitive also in the future. This includes an interdisciplinary research approach which we’ve successfully practiced and implemented in Chemnitz, for example, in the Cluster of Excellence “Energy-Efficient Product and Process Innovations in Production Engineering (eniPROD).” Towards this end, engineers, mathematicians, computer scientists, physicists, and economists from the TU Chemnitz and the IWU have developed new operating principles, construction methods, and technologies designed to reduce primary energy consumption and to increase energy efficiency in production. This was actually a real milestone on our way to realizing the E³ Factory.

What’s going on in the Research Factory?

In the Car Body Construction sector, we put the automobile production of tomorrow center stage. With the help of a complete plant for the assembly of mass produced doors, we’re developing and testing together with the Volkswagen Group and other industrial partners a fully flexible car body construction technology which will be used in mass production in the future and which is designed to significantly increase productivity, for example, during model changes. Research must not be an end in itself; it actually has to reach industry. This applies, of course, also to the other sectors in the E³ Factory. In the Powertrain sector, we focus on the implementation of ultrashort process chains for the production of drive and propulsion components. Instead of machining methods, we’re applying forming technologies which require fewer resources and process steps. And under the motto Energy and Data Management 2.0, we’re finally collecting all consumption, machine, and process data in a management system which permits the staff members to optimally control the resource and material flows.

What links the E³ concept to Industry 4.0 and Smart Factory?

Industry 4.0 and Smart Factory are components of the E³ concept. E³ is, in principle, a different level. This is not only about linking the information world to the production world, but also about new business models which accelerate value creation. The research concept of E³ production is a response to the global megatrends. What makes it so innovative is the clear focus on sustainable value creation and, consequentially, a holistic approach to the key components of the production system: Resources/raw materials, energy information, and humans.

What is the role of humans in this concept?

Humans continue to be the initiators and inspirers. Without them, the production of the future cannot be implemented. Such factors as demographics, increasing automation, and the new opportunities provided by IT, however, call for new concepts for the integration of humans and their interactions with technology. In flexible car body construction cells, for example, we’re testing the cooperation of humans and robots. Safety and ergonomics play a central role in this. 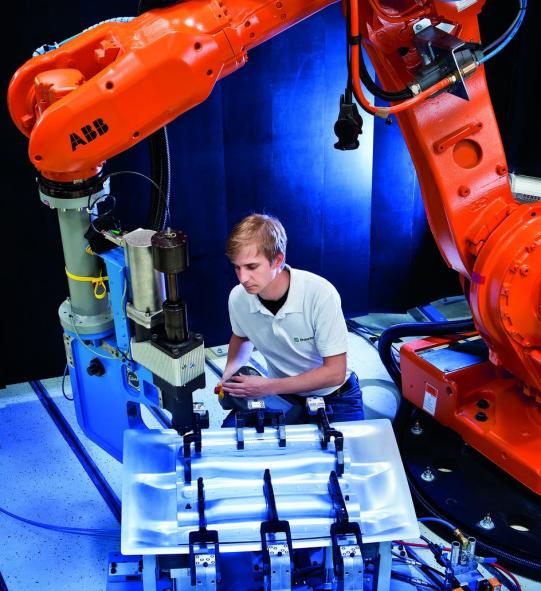