SECTORAL DISTRIBUTION OF THE EMPLOYEES

The sectoral distribution of Saxony’s employed persons is illustrated by the adjacent figure. As depicted, 1.2 percent of the total number of employees in 2021 accounted for agriculture, forestry, and fishery, and 18.8 percent for the production industry (without construction sector). The entire service sectors accounted for 72.4 percent.

When it comes to the service sectors, 32.8 percent of the employees in Saxony were attributable to the public services, education and health sector, 23.4 percent to the trade, transport, hotel & restaurant, information & communication sector as well as 16.2 percent to the sector real estate activities, financial and insurance services, business services.

More than one third of those employees in Saxony who are subject to mandatory social insurance contributions have their residence in the two large cities Leipzig and Dresden. That’s why it’s not surprising that both metropolises have exhibited the highest growth rate since 2011, whereby Leipzig has slightly surpassed Saxony’s state capital during this period of time. However, growth has also been recorded in all other regions in Saxony.

50.7 percent of the approximately 4.05 million Saxons are female. Compared, above all, to all German federal states, these females represent an above average proportion on the labor market.  In 2021, more than 780,000 women in Saxony were in work subject to mandatory  social insurance contributions. This corresponds to 65 percent of all women of working age, nine percent more than ten years ago and the national peak in Germany. 781,246 women and 842,217 men who are subject to mandatory social insurance contributions are currently employed on Saxony’s labor market.

A pioneering role is also assumed by women in executive positions. 27.9 percent of the chief executives in Saxon companies are female. Thus, Saxony ranks second in a nationwide comparison. (Source: CRIF GmbH, as of March 2022)

In Saxony, a large proportion of employees who are subject to mandatory social insurance contributions is between 45 and 60 years old. – That’s why these employees can build on extensive professional and personal experiences. The next generation of 25 to 40 year old employees is almost equally strong – with fresh ideas and high educational levels.

While women are slightly in the majority in the age group between 50 and 65, the younger generation closes the gap with more male employees. 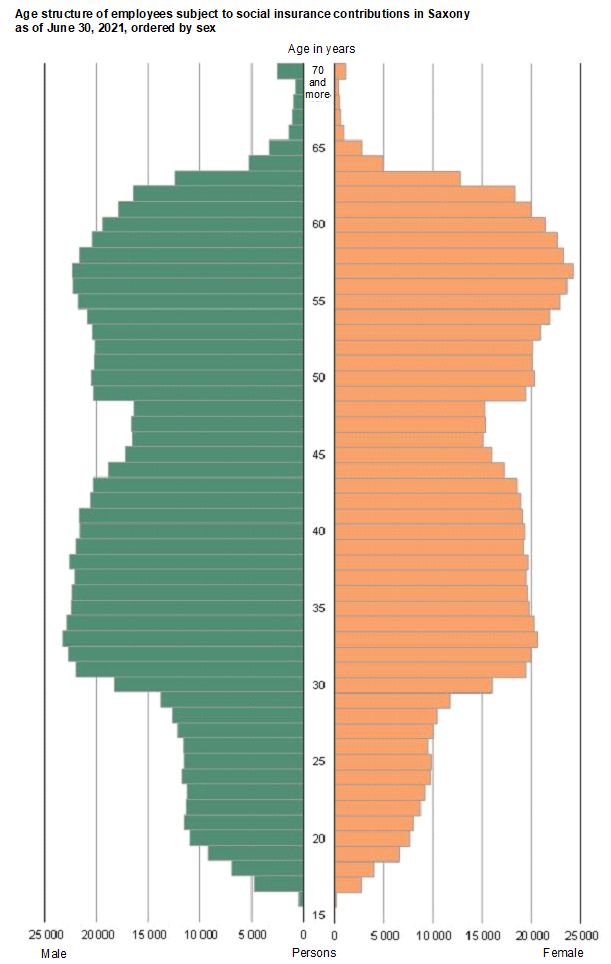