In Dresden, the United Nations University researches the issues and interdependencies associated with the management of resources.

While the global population and economy is growing, the demand for water, food, and energy is constantly rising as well. More than ever before, this calls for the sustainable management of natural resources. The United Nations University Institute for Integrated Management of Material Fluxes and of Resources (UNU FLORES), which was founded in Dresden in 2012, wants to make a vital contribution towards solving this global challenge. The institute cooperates closely with Dresden University of Technology (TU Dresden) and other research institutions in Saxony.

Prof. Bernhofer, what exactly is the United Nations University?

UNU was established in the early 1970s to advise the United Nations independent of any national interests and to provide a sound scientific basis for decision making processes. Its headquarters are in Tokyo. There are UNU institutes around the globe, including two locations in Germany: One in Bonn and, since 2012, another one in Dresden.

What happens at the UNU FLORES institute in Dresden?

The scientists address the management of water, soil, and waste as well as their complex interdependencies. They analyze, for example, how materials can be controlled in these sectors in such a way that valuable basic materials are no longer diluted. Their insights are to contribute to the development of strategies for a sustainable use and treatment of resources. Five groups of researchers were formed to investigate the topics water, soil, and land use; liquid and solid waste; the interdependencies of water-soil-waste as well as capacity development.

What is capacity development?

For us, this includes measures to promote such capacities as education and training, reducing structural deficits, and strengthening institutions – these are all vital prerequisites to overcome the challenges and to avoid any conflicts over who is responsible for what.

What projects are addressed in particular?

Other scientific issues revolve around Africa. The scientists investigate, for example, the significance of droughts for agriculture or the adjustment of urban wastewater systems. In fact, different systems exist for the collection, channeling, and treatment of wastewater and this means that we always have to keep groundwater and surface water protection in mind.

Are there already some results?

First, it’s always essential to ascertain the current situation. Then the requisite research proposals have to be submitted. Initial investigations have been made on the “Waterpoints” project which analyzes the interdependencies of water sources and land use. They not only consider the type and location of a water source, whether it be a well or a faucet, but also the reactions of the population to these sources. For example, if a sufficient amount of water is available, then animals will have enough water to drink. Consequently, there will be larger herds which, in turn, will have a greater impact on land use. Social phenomena play a role as well. This example aptly demonstrates how an individual measure, for example, installing a water source, can also create new problems.

This brings us to the special approach of UNU FLORES – the keyword here is NEXUS. The word means connection, coherence. What’s so special about nexus is its interdependent, integrative approach which takes different scientific disciplines into account. We see water, soil, wastewater not as separate topics; instead, we consider them to be a holistic system. This is the only way to cope with the complexity of the problems. A sustainable management of environmental resources is only possible if this management is integrated and holistic.

UNU FLORES wants to advance the nexus approach, also at an international level. The first Nexus Conference was held in Dresden between March 25 and 27, 2015. Among the participants were scientists from around the globe whose research focuses on water, soil, and waste.  In the future, the meeting is to be held every two years in Dresden.

Why was the institute founded in Dresden?

Around 2009, we started to develop a concept for the institute at TU Dresden’s Faculty of Environmental Sciences. We wanted to put research into a broader international context and to contribute our competences right there where they are needed. That’s why we’ve identified specific problems. Particularly in the environmental sector, many excellent solutions are available in Germany which can be transferred, in part, also to other countries.

In an international workshop held in Dresden at the end of 2010, the concept was developed further. Among the participants were also representatives from the UN and the United Nations University. An additional meeting took place in Maputo (Mozambique) where a partner institute is currently being established.

What’s the situation now, four years after the official inauguration?

I think that UNU FLORES is very active and has made great progress. Currently, the institute has about 20 employees. This includes the Director, Prof. Dr. Reza Ardakanian, the five so called Academic Officers who head the work groups, additional technical and academic staff members as well as a number of interns. Five doctoral positions were also created which are to be expanded to 15. The establishment phase of the institute is scheduled for four years and is to be completed in late 2016. And then it will be our task to firmly root UNU FLORES as a permanent institution both in the peoples’ minds and within the established infrastructures.

What’s the role of the doctoral program?

The nexus approach is actually center stage here as well. The first doctoral candidates will arrive in February; two from Africa, two from Asia, and one from Germany. Together with our Academic Officers and in close cooperation with the TU Dresden, they will focus on diverse topics.

We want to educate and train such experts as environmental scientists, engineers, and managers so that they’ll be able to perform and promote the sustainable management of water, soil, and waste in their home countries.

How is the institute financed?

The German Federal Ministry of Education and Research (BMBF) and the Saxony State Ministry of Science and the Fine Arts (SMWK) support UNU FLORES each with one million euros per year. In addition, third party funds are available for project research. Some doctoral candidates receive scholarships from their home countries.

And how can Saxony profit from UNU-FLORES?

Having the first institute of the United Nations University in East Germany is really something special. The cooperation with UNU FLORES helps Saxony’s research institutions strengthen their profile at an international level. And contacts to new markets are also being established. This will also benefit Saxony’s companies. 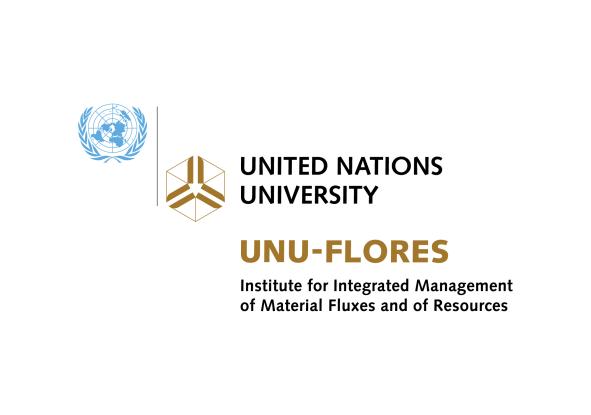