Prof. Buchholz, you’re a molecular biologist and you’ve conducted research in Heidelberg and San Francisco. Why did you decide to come to Dresden?

After having stayed in the USA, I wanted to go back to Germany with my family in 2002; above all, because we wanted our kids to grow up here. I was given the opportunity of establishing my own work group at the MPI-CBG. You could feel the energizing pioneering spirit in the biotechnology sector at the research venue Dresden. And what also spoke in favor of Saxony was the fact that childcare could be organized relatively easily. In West Germany, this would have been much more difficult.

Looking back, would you say it was the right decision?

I’m very happy here both professionally and privately. The general conditions are not only perfect for research; the city itself is also a place well worth living in and very family friendly. With regard to the research landscape, Dresden has undergone a remarkable development in an international comparison since the early 2000s, primarily on account of the clusters of excellence located here. When I got offers from diverse research centers at the end of my project at the MPI, it was easy for me to decide in favor of the University Hospital Dresden.

What makes the research venue so special for you?

Biologists and physicians cooperate closely with one another. Their work is characterized by a strong team spirit which inspires everyone and makes many things possible. Perhaps it’s because the Faculty of Medicine in Dresden is a comparably young university hospital. The unique atmosphere and the first-class infrastructure mutually stimulate each other. Such facilities as the University Cancer Center Dresden (UCC), the National Center for Tumor Diseases (NCT), the German Consortium for Translational Cancer Research (DKTK), the Max Planck Institute CBG, and the Helmholtz Center Dresden-Rossendorf (HZDR) cooperate closely with the University Hospital. Many dynamic work groups conduct research in the field of oncology. Such an environment is extremely important for scientists because it’s only when you exchange ideas with the best that you actually achieve the best possible results.

Are there any other factors which play a role?

In addition to the scientific infrastructure, there’s also a lot of support in other areas. Dresden|exists, for example, assists and accompanies business startups and technology transfer, Dresden-concept e. V. links partners in networks and develops synergies. The Free State promotes and advances research primarily through financial support.

Are spin-offs a big topic for you?

Especially in medicine, promising findings from fundamental research should be transferred into clinical applications very quickly. That’s why it’s of utmost importance to support spinoff projects. Start-ups with economic potential find superb conditions here; in other words, suitable premises and labs, consulting services for business founders, and financial support. It would be good to attract more capital investors for founding new companies in Saxony. This has also been recognized and acknowledged by Saxony's State Government which is why it’s actively supporting these efforts.

How relevant are international relations?

The work groups are closely connected with one another not only on site, but also at an international level. Dresden has an excellent reputation in the life sciences and is a real beacon. With such offers as the international doctoral program, which the university coordinates together with the MPI-CBG, it’s possible to spark interest and generate enthusiasm for the venue among young scientists. A lot of excellent young talents come from such Eastern neighboring countries as, for example, the Czech Republic, Poland, or Bulgaria. But we also have colleagues from China, India, Russia, and the USA, of course. Cosmopolitanism is a vital element of research. That’s why I advocate and support an open and tolerant Dresden and Saxony because diversity benefits everyone.

Where do you see the future of Saxony's biotechnology branch?

The vision points towards cell and gene therapy. Here, the Faculty of Medicine is superbly positioned together with the Center for Molecular and Cellular Bioengineering (CMCB). Based on the existing scientific and medical infrastructures, Saxony can continue to shape and strengthen its profile well beyond Germany’s borders.

The molecular biologist Frank Buchholz is the Chair of Medical Systems Biology at the University Hospital Dresden and the Head of Translational Research at the University Cancer Center Dresden (UCC). His work group has developed a method with which it is possible to repair or remove defective sections in the genome. This permits the treatment of diseases which are caused by a defect in a gene. After having founded the Eupheria Biotech GmbH corporation in 2010, two other startup projects which he initiated, Provirex and RecTech, were launched over the past few years. These projects focus on the continued development and promotion of a technology which not only excises the genome with pinpoint accuracy but is also able to reconnect the two cut surfaces with utmost precision. 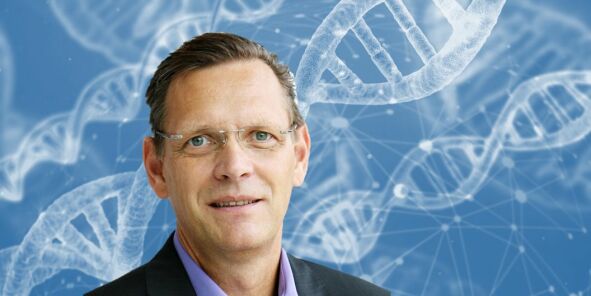